www.FremontCountyWildFire.com
Wildfire addresses the risk of homes in the wildland/urban interface to the wildland fire.
Making your home able to survive an approaching wildfire is the goal of the Hazardous Fuels program.
Landscaping
News
Photo Gallery

Experience has shown that landscape design is one of the most important factors in a home’s survival. An aggressive defensible space and fuels reduction plan can greatly increase your home’s chance of survivability in a wildfire without decreasing the aesthetic value of your home.

To create an effective ignition-resistant landscape, remember that the primary goal is fuel reduction. To this end, create defensible space zones around your home. Zone 1 is the closest to your house. Zones 2 and 3 move progressively away from your house. 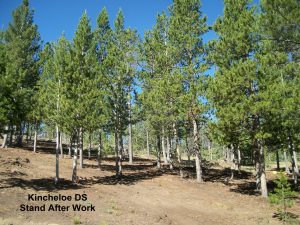 An aggressive defensible space and fuels reduction plan will also promote healthy vegetation in the forest surrounding your home. Insect and disease attacks such as Comandra Blister Rust, Dwarf Mistletoe, and Mountain Pine Beetle can devastate an unhealthy, overgrown forest in a very short time. However, with selective fuels reduction you can promote tree health and improve growth while inhibiting the spread of insects and diseases.

Comandra Blister Rust is a disease that is caused by a fungus growing in the inner bark. The fungus has a complex life cycle. It infects lodgepole pines, but needs an alternate host, an unrelated plant to spread from one pine to another.

Dwarf Mistletoe is a native, parasitic, seed plant that occurs essentially throughout the range of western conifers in North America. It is the most damaging disease agent in coniferous trees, causing severe growth loss and increased tree mortality.

In the United States, the principle host of Dwarf Mistletoe is the lodgepole pine. It is occasionally found on limber and ponderosa pines, Engelmann spruce, blue spruce, whitebark pine, and Rocky Mountain bristlecone pines as well.

Abnormally tufted branches characterize affected trees. These growths, which are caused by the Dwarf Mistletoe, are called witches’ brooms. Dwarf Mistletoe can cause the tree’s growth to slow and eventually the crown will die. It also reduces the seed production of the host trees and can cause deformities such as cankers and knots.

Mountain Pine Beetle is a member of a group of beetles known as bark beetles. Except when the adults emerge and attack new trees, the mountain pine beetle completes its life cycle under the bark of the tree.

The beetle attacks and kills lodgepole, ponderosa, and western white pines. Outbreaks frequently develop in lodgepole pine stands that are grouped in dense stands of trees.

During epidemics, widespread tree mortality alters the forest ecosystem. Often, beetles have almost completely depleted the commercial pine forests. Moreover, the dead trees that are left after an epidemic are a source of readily ignitable fuel that will burn unless removed.

Douglas-fir Beetle is an insect that infests and kills Douglas-fir throughout most of its range in western United States. Douglas-fir beetles normal kill small groups of trees, but during outbreaks hundreds of infected tree groups are not uncommon. Losses can be devastating during periodic outbreaks.

At low or endemic levels, the beetle infests scattered trees, including windfalls and trees injured by fire, defoliation, or root disease. Where such susceptible trees are abundant, once they have been infested and killed, beetle populations can build up rapidly and spread to adjacent green, standing trees.